Castle Hayne, NC – November 17th, 2016 – In May of 2016 Mirimichi Green tackled one of the most well-known college football stadiums in North Carolina. The University of North Carolina’s Kenan Memorial Stadium applied Mirimichi Green’s CarbonizPN Soil Enhancer and Nutri-Release before laying down new sod in order to get the field ready for preseason summer training, six home games, and other athletic activities.

The University of North Carolina used Nutri-Release at a rate of 7oz/M and CarbonizPN Soil Enhancer at a rate of 50lbs/M. The stadium’s turf is lush, green and durable and has withstood a heavy playing season. After seeing the rapid and deep root growth the sod formed from using the products, UNC began to incorporate the products into other projects.

The Director of Athletic Grounds and Turf Management at the University of North Carolina, Casey Carrick, said “We first used the CarbonizPN Soil Enhancer and Nutri-Release last year on Kenan Stadium when we re-sodded the entire field. Being a sand-based field, we felt it held nutrients much better, and the overall quality of the field has been better than years past. Since then, we have used the soil enhancer under sod on 3 other fields and will continue to do so on future sod installs. We currently spray Nutri-Release at least once a month during our growing season when we are applying foliar fertilizers. So far we’ve had great results with Mirimichi Green products and plan to continue using them as a regular part of our installs and fertility program.”

Thanks to the help of Ewing Irrigation’s Sports Field team, one of Mirimichi Green’s distributors, this athletic field renovation led Mirimichi Green to later work on other well-known sports fields such as Duke University’s Wallace Wade Stadium and the Dallas Cowboys new practice facility. 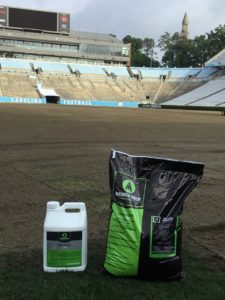 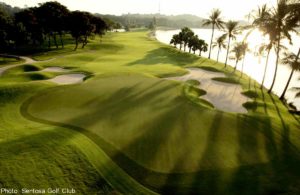 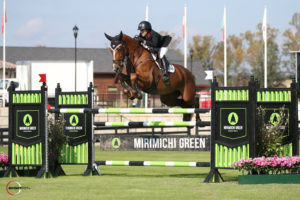