The maintenance rituals of aerification and topdressing are fixtures in the world of golf. Depending on their locales and annual budgets, superintendents spend a few days each year punching holes in their greens with metal tines, or pulling cores with solid tines to improve airflow, break up organic material and maintain turf health.

The process requires time and man-hours. It can result in lost revenue, particularly at daily-fee facilities, because the golf course must close while the work is in progress. Golfers then may stay away for a stretch even after the course reopens.

Superintendents are exploring alternatives to traditional aerification. For example, DryJect, headquartered in Hatboro, PA, just outside Philadelphia, has a machine that accelerates the aerification/topdressing process by substituting powerful streams of water for tines. 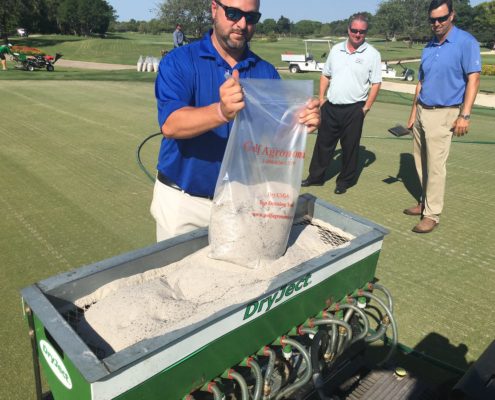 While no soil material is extracted in the process, a crude comparison to the technology is to think of the stream of high-pressure water as a solid tine, says Jeff Broadbelt, DryJect’s vice president of operations.

“Each pulse of water is a make-believe solid tine,” he says. “But the pulse of water, when it’s shot down, produces an explosive-type reaction going down. There is a lot of lateral shattering going on. It’s like a mini-earthquake.”

Depending on soil conditions and the superintendent’s preference, the holes are punched to a depth of between 2½ to 6 inches. For instance, some turf managers may desire deeper holes to break up a layer of organic material that might be present where holes were punched in the past using solid tines. The most common depth is in the 4- to 5-inch range. The holes are spaced at adjustable intervals.

What has piqued superintendents’ interests is the fact that immediately after the holes are created, they are filled with sand, reducing or perhaps eliminating the need for heavy topdressing in between core aeration cycles.

“We’re taking out the topdressing component by just getting it done for you right off the bat,” Broadbelt says. “A lot of superintendents will maybe topdress lightly afterward, but it’s not necessary. There is a little bit of sand residue left. Not every grain of sand gets into that hole. It’s equivalent to a very light topdressing.”

Because the holes filled are virtually instantaneously, a superintendent could theoretically begin work on their front nine in the early morning hours and have those holes open for play by afternoon, a big difference from having to shut the greens down for a stretch of time following a core aeration.

It’s common for superintendents to add material or amendments, to the sand to retain moisture in the soil and the root system of the plant. The amendment consists of sand-sized particles of material, creating a mixture that might be as much as 90 to 95 percent sand, the remainder being the amendments. 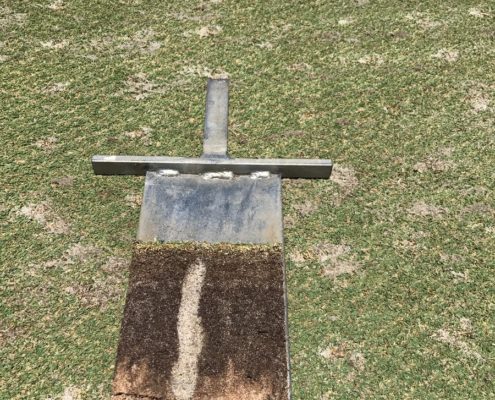 For example, Profile Products of Buffalo Grove, Ill., manufactures PPC Green Grade, a porous ceramic material that strengthens root systems, enhances moisture retention and increases disease resistance. The particles are 74 percent pore space, 39 percent capillary (water) pores and 35 percent non-capillary (air) pores. “If you look at (the particles) under a microscope, they have all kinds of micropores in them,” Broadbelt says.

They hold water, but once they’re filled, water drains through them like a sieve. So, you’re not necessarily giving away downward drainage by using the product. “It does hold water, but not so tightly that the roots can’t extract from it,” Broadbelt adds.

Mirimichi Green manufactures CarbonizPN, a soil enhancer it markets as an amendment, which, among other things, reduces soil compaction and water needs while also optimizing soil pH. It’s a 50/50 blend of crystallized carbon (Biochar) and a premium organic compost that the company manufactures. Because the carbon portion has a half-life of around 500 years, Mirimichi Green’s chief operating officer Web Cowden describes the product as a “permanent soil amendment.”

“It has a very porous structure,” he says. “The process by which we make this is called pyrolysis (utilizing extreme heat to simulate the chemical decomposition of organic material). What you’re left with is a very porous crystalized structure that has a very high carbon content and a very low ash content. It has the ability to hold air, water and nutrients within its pore structure, and makes them available to the plant when they are needed.”

In addition to CarbonizPN, Mirimichi Green manufactures Nutri-Release, a broad-spectrum liquid organic fertilizer that can be added to the sand/amendment mix as a biostimulant at a rate of three ounces per 1,000 square feet. The two products, when used in tandem, have a significant impact on the soil profile, Cowden says.

The idea of punching holes with water is not a new one. The technology was developed in Sweden and later became the property of Land Pride, a division of Great Plains Manufacturing.

In 2000, Peter van Drumpt and Chris des Garennes purchased the technology, along with the patent that went with it and other necessities, and then making alterations so it would be both reliable and commercially viable. Thus, DryJect was born.

It’s possible to treat 18 holes in a single day, depending on the number of DryJect machines being used on the job. Typically, two or three machines can complete the task, but perhaps four are needed depending on the size of the greens being treated.

The structure of the crystallized carbon, which Cowden describes as resembling a honeycomb, holds air in some of its pore spaces, thereby allowing improved air circulation in areas where the organic material may have accumulated over time.

“That becomes kind of a home for all the biological activity,” Cowden says. “All the microbes have a place to go into these pores. They’re protected, they can reproduce and help keep the soil biology alive. Having an aerobic root zone is just as important as having moisture down there. When that becomes anaerobic and your biology can’t survive, thrive or reproduce, then you get a dead thatch layer and everything below it just dies away.”

The process is catching on with superintendents throughout the country. Chris Tritabaugh, completing his sixth season as the superintendent at Hazeltine National Golf Club in Chaska, Minn., which hosted last year’s Ryder Cup, first used DryJect in October of 2015 and in May and October of 2016. He used it again this past May. Another treatment was scheduled for Nov. 1. 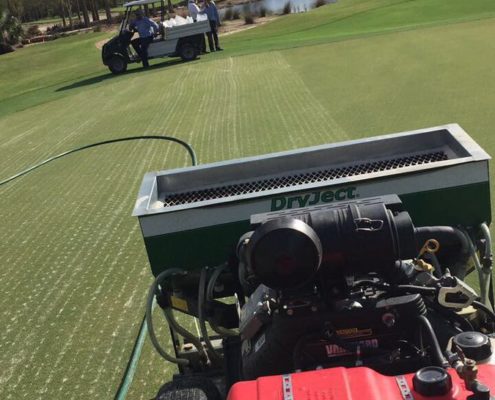 “Our greens have gotten a lot better since we started doing it from a firmness standpoint,” Tritabaugh says. “They weren’t bad, but in my opinion, they perform now just as well as they did when they were new.”

Tritabaugh and his team do not use an amendment during the process. Instead, the holes are filled with 100 percent sand. “We’re able to get the exact same sand that was in the root zone when the greens were built in 2010,” he says. “From a spec standpoint, it’s the same thing that’s already in there.”

Some have raised the question of whether DryJect will supplant traditional aeration as a standard industry practice. Tritabaugh doesn’t necessarily share that sentiment.

Based on his experience, Tritabaugh doesn’t believe the DryJect method will render core aeration or solid tining obsolete. Instead, he considers it just another tool in a superintendent’s turf toolbox.

Tritabaugh hasn’t relied on pull-core/solid-tine practices at Hazeltine in recent years, but he hasn’t abandoned them either. “We’ve done some different methods on a couple of our greens,” he says. “Is it a tool we want to use in the future? It could be, but it’s not a part of our standard cultural practices.”

Rick Woelfel is a Philadelphia-based writer and frequent GCI contributor. 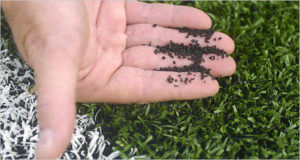 6 Factors To Keep In Mind About Artificial Turf Fields 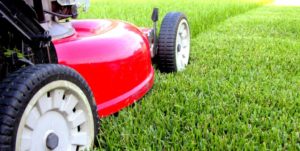 The Top 6 Most Common Landscaping Mistakes